Summer, 2010 Originally intended to support the development of SoleFood, The Real Estate Foundation funds Building Opportunities with Business to support job creation through urban farming. With SOLEfood facing numerous challenges to developing an urban farm in Vancouver, the funding is diverted to develop an urban farming network.

November 22, 2010 After some initial meetings with academics and urban farmers a meeting at Little Nest is called. Urban farmers, urban farming supporters, and food security advocates gather in East Vancouver to introduce their projects and businesses to each other, some coming from as far away as Kelowna and Vancouver Island. Discussion starts about what urban farmers need to be successful. This is the first time such a group of urban farmers gather together in Vancouver – taking this group of urban commercial food producers from operating mostly independently to an increased level of cooperation.

November, 2010 A Vancouver urban farming listserve is formed and administrated by Chris Thoreau. In just two years the list serve has over 180 members.

January, 2011 Peter Ladner brings Will Allen of Growing Power to Vancouver for an inspiring intimate Q and A session with Vancouver’s urban farmers at Chapel Arts in Strathcona. A brainstorming meeting follows to bring into focus a shared vision for urban farmers with which to move forward and to collectively identify priorities for increasing the sustainability of urban farming in Vancouver.

April to September, 2011 Monthly urban farmer tours and gatherings are hosted at urban farms throughout the city primarily for farmer-to-farmer exchange of ideas and food. 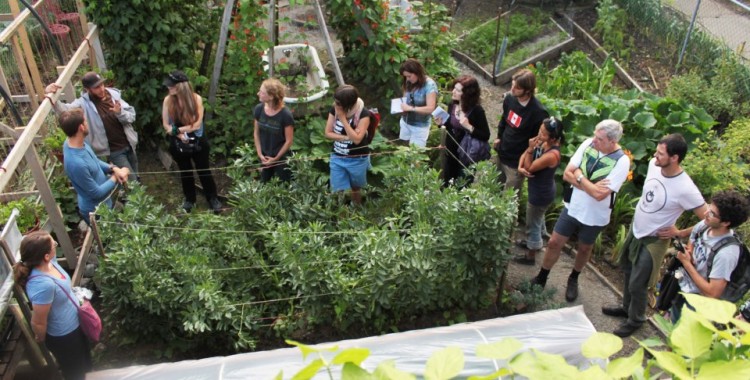 One of the first urban farmer gatherings – this one touring Gray’s backyard garden!

November, 2011 Inaugural Urban Farming Forum in Vancouver, BC. Over 100 urban farmers, policy makers, and food security advocates gather together at SFU Woodwards in downtown Vancouver to discuss urban farming and the issues of land use, municipal policy, and best practices. Drawing on urban farming policy precedents from other West Coast cities such as Victoria, Seattle, and Lantzville – and in an effort to contribute to Vancouver’s goal of being the Greenest City in the World – this forum helps to lay the framework for supportive urban farming policies in Vancouver and elsewhere. The forum is funded by the City of Vancouver, SFU Woodwards, the Real Estate Foundation of British Columbia and Carrot Cache. Joanna Clark is hired as the organizer.

December, 2011 to April, 2012 Meetings among interested individuals, following the success of the Urban Farming Forum to form a society accountable to its members. The founding board establishes the Society purposes, submit the bylaws to the Province, incorporates the society and collaboratively writes and submits an EnviroFund grant proposal to Vancity Credit Union.

April to September, 2012 Monthly tours of Urban Farms in partnership with Young Agrarians, which help farmers to share their experiences and insights, and also offer the public the opportunity to meet their farmers.

October, 2012 VUFS commissioned to install an urban farming display during the Sustenance Festival at Vancouver’s Roundhouse Community Centre. The VUFS farmer and goat cutouts are born! December, 2012 Board of directors retreat to facilitate visioning process for the society.

May 13, 2013 VUFS President Ngaio Hotte is published in The Vancouver Observer, “Does ‘local’ matter? It does to Canada’s farmers”

Summer, 2013 More farm tours, workshops and monthly newsletters. The board motions to adopt a new Vision and Mission, to be workshopped at the 2013 forum. Community survey launched by a team of volunteers in every Vancouver neighbourhood to elicit public opinion on urban farming.

September, 2013 Vancity Envirofund awards $36,048 to VUFS for its “Room to Grow: Implementing Best Practices” project, to be implemented by contractor Zsuzsi Fodor.

November 17, 2013 3rd Annual Urban Farming FORUM! at SFU Harbour Centre and Boogie and Barter Fundraiser at the Hive replete with date-with-a-farmer auction. The City of Vancouver awards VUFS $7000 in support of the forum. The focus of the forum is to share preliminary research results with the urban farming community and supporters, for final refinement and input.