Understanding our Practices from Seed to Scrap:
The 2012 Vancouver Urban Farming Forum

A Summary of What We Heard 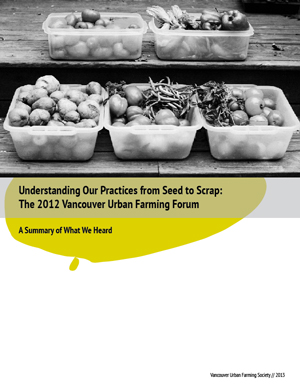 The first Urban Farming Forum, which took place in 2011, invited food security advocates, policy makers, and urban farmers alike to engage in vibrant discourse around urban farming, as well as discuss ways in which Vancouver’s Greenest City goals could be met in the context of urban farming policy. The 2012 installment, at the HiVE in Vancouver, was centered around urban farmers specifically to allow for a more concerted effort at data collection and discussion most relevant to the farmers themselves as part of a year long research project into urban farming practices in Metro Vancouver.

We had 18 urban farming organizations from across Metro Vancouver participate and work with us to create a baseline landscape of urban farming practices throughout the region with a focus on the City of Vancouver. It was the beginning of the much larger community research process that is underway which looks even closer into the landscape of practices addressing what is working, what is not, and where the gaps are. A more in depth deliverable will be available at the end of the summer. Stay tuned!